The 12 NAs of Christmas Release Day! 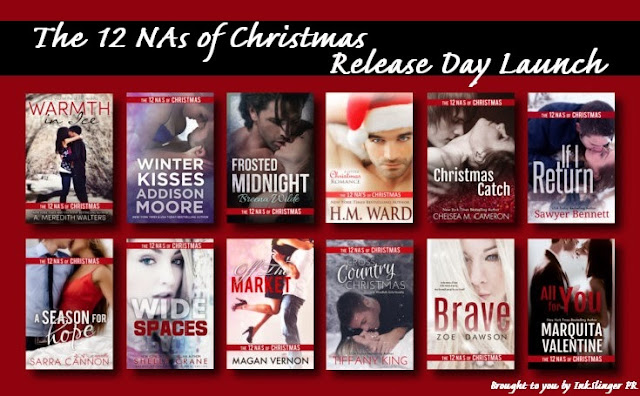 I am so excited for the these 12 novellas. One because they are by best selling authors and two because they are Christmas themed! I've just finished Christmas Catch and the teaser below has get me adding Frosted Midnight to my TBR! 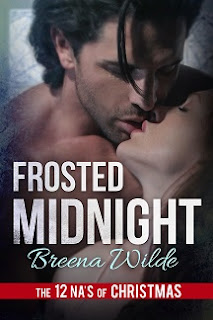 Willow needs a miracle...
Twenty-year-old Willow is a librarian in the tourist town of Bandon, Oregon. During the summer the town is bursting with interesting people from all over the world.
Two summers ago she met Austin. He was everything she ever wanted in a man: smart, funny, and gorgeous. But after eight perfect weeks he left, and she hasn't heard from him since.
Until Christmas Eve. She receives an email from Austin asking her to meet him at midnight so he can explain.
It might be a booty call, but Willow has to see him one last time, even if it's just to say good-bye.

Teaser!
I was nineteen when I fell in love. It was that once in a lifetime kind of love, the kind of love that hit hard and didn’t let go, the kind where all I could do was think about him. Only him. Always him.
The shine in his hazel eyes and the way the corners of his eyes would crinkle when he smiled. Or the way his dark hair fell into his face when he leaned down to kiss me.
His name was Austin Merrick. He wasn’t a boy from my quaint tourist town of Bandon, Oregon. He was a man: tall, muscled. He wore cowboy boots, jeans that sat low on his tapered hips, t-shirts, and a cowboy hat that looked older than him. He had a square jaw, straight white teeth, and a mouth that could do things to my lips and my body…
He was my first time, my every time. From the moment I met him I knew I’d never have to look at another man again.
I still didn’t know why he came to Bandon, but from the moment he walked into the library where I worked, came over to my desk, and asked for my opinion on a good book, I was a goner. Yes, it was love at first sight. And I didn’t regret it.
He was in my life for eight weeks, eight flawless weeks. And then he left. Without a good-bye. Just rolled over, kissed me tenderly, walked out of my bedroom, and never came back.
My heart broke that day, splintered into a million pieces.

I definitely want to read this one!


Off The Market by Magan Vernon
Etta Davis must decide if a second chance with an old flame is worth taking her house, and her heart, off the market
Author~ www.maganvernon.com
Book~ https://www.goodreads.com/book/show/18106538-off-the-market

Brave by  Zoe Dawson.
His heart was closed, his emotions buried, he was a man on the edge of self-destructing. This Christmas, snowbound in Colorado little did he know that courage would be found in another searching for the strength to be brave.
Author~ www.zoedawson.com
Book~ https://www.goodreads.com/book/show/18106546-brave

Cross Country Christmas by Tiffany King
A hilarious, heart warming Christmas tale about finding love in the least likely situation.
Author~ www.tiffanyjking.blogspot.com
Book~ https://www.goodreads.com/book/show/18107073-cross-country-christmas---the-12-na-s-of-christmas?from_search=true
Christmas Catch by Chelsea Cameron.
She swore she was never going back to the tiny fishing village she came from. So did he. But when they’re both dragged back to Saltwater, Maine, they might realize it’s where they belong. Together…
Author~http://www.chelseamcameron.com/
Book~ https://www.goodreads.com/book/show/18106783-christmas-catch

Warmth In Ice by A. Meredith Walters
Clay and Maggie struggle to build a future while overcoming the demons of their past. And during the heat of a Florida Christmas they are reminded that theirs is a love worth fighting for.
Author~https://www.facebook.com/pages/A-Meredith-Walters/311504738868378
Book~ https://www.goodreads.com/book/show/18106519-warmth-in-ice

If I Return by Sawyer Bennett
What was supposed to be a quiet Christmas holiday turns into a life changing event for Hope and Jack. The only problem? Jack is headed off to war, and there is no guarantee he will come back.
Author~http://www.facebook.com/bennettbooks
Book~https://www.goodreads.com/book/show/18106691-if-i-return

Wide Spaces by Shelly Crane
When they found each other, they knew that life had given them a second chance. But a life together that saved them will become a life they think is lost forever.
Author~http://www.shellycraneauthor.com/
Book~https://www.goodreads.com/book/show/18068475-wide-spaces---the-12-na-s-of-christmas

Winter Kisses by Addison Moore
Having a one-night stand with your ex is never easy. She thinks its revenge sex. He thinks its make-up sex. Things can only go wrong from here.
Author~https://www.facebook.com/pages/Addison-Moore/140192649382294?ref=hl
Book~https://www.goodreads.com/book/show/18107070-winter-kisses---the-12-na-s-of-christmas

All For You by Marquita Valentine
The only thing West Diaz wants for Christmas is McKenzie Walsh's forgiveness, but she's not ready to make nice, until, that is, he willingly humiliates himself in public to prove he's not the same guy who bullied her in high school. But can one simple act overcome years of torment?
Author~https://www.facebook.com/AuthorMarquitaValentine
Book~https://www.goodreads.com/book/show/18106807-all-for-you--the-12-na-s-of-christmas

A Season For Hope by Sarra Cannon
After a devastating breakup, Bailey Houston just wants to give up on life. But can sexy med-student Judd Kohler teach her that Christmas really is a season for hope?
Author~www.sarracannon.com
Book~https://www.goodreads.com/book/show/18106973-a-season-for-hope