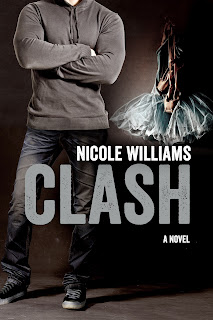 The only easy thing about Jude and Lucy’s relationship is their love for one another. Everything else is hard.
Especially when it comes to reigning in Jude’s trigger touch temper and Lucy’s increasing jealousy of Jude’s Spirit Sister on the cheer squad who’s attached herself to him in just about every way a girl could. Feeling the stress of trying to hang on to her quintessential bad boy while becoming the foremost dancer in her class, Lucy knows something’s going to break. She wants both. She needs both. But if she doesn’t make a choice, she risks losing everything.
For Lucy Larson and Jude Ryder, love might be the thing that just isn’t enough.


Thoughts!
Sequels where the couple are together can often go the cliché route of cheating etc. but Clash avoided that completely. I liked how their relationship was explored further and underlying issues were brought up and dealt with properly.
Jude and Lucy also stayed true to their characters from Crash. I still really loved Jude, he was the perfect bad boy grown up into a good guy! I liked how he remained unfailingly loyal and true although he was like all boys completely oblivious to Adriana's obvious behaviour! I liked Lucy even more in Clash- she was much more rounded as a character but remained determined to reach her dreams no matter what. Jude and Lucy also both remained very poor at communication or reading between the lines when it came to each other.
I definitely still really enjoyed Lucy's Dad as a character. I admired how much of an effort he made to make Jude feel welcome and comfortable despite the unbearably awkward situation they were in. I felt Lucy's mum really stepped up in Clash and engaged with Lucy. She gave great advise and actually parented Lucy instead of being as distant as she had been in Crash.
Holly was one of my favourite characters, she has such a pivotal role as Jude and Lucy's friend. I want to read more about her life, work and Jude junior! I also would have liked more of Lucy and Jude's school lives but there is one final Jude and Lucy book!
Rating!

I loved Clash! It didn't just throw an obstacle at Lucy and Jude but explored their relationship, the good and the bad!