Blog Tour: Near and Far by Nicole Williams. 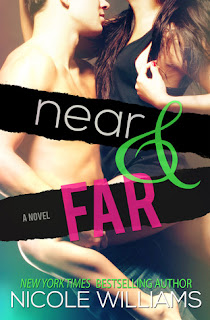 There’s optimistic. And there’s Jesse Walker.
If he wasn’t so charming, his sunny disposition and incessant grin would get old. Fast.
Falling in love with the broken girl who had at first seemed immune to anything resembling love was the best thing to happen to Jesse since the Walkers adopted him when he was five.
As Jesse’s life continues at the ranch and Rowen begins making her mark in the Seattle art community, they wonder where the middle ground is. Or if there even is one.
As push comes to shove, they’re forced to make choices neither are eager to make, and Jesse and Rowen have to face what their lives might look like without the other.
Can two people with such tragic pasts and different presents expect a promising future together? Whatever the answer, they’ll need a lot more than love to make it.
Why?
I loved Lost and Found so I was planning on reading Near and Far when I got the chance to sign up for the blog tour!

What I loved:
Plot- I really liked that the plot wasn't the clichéd long distance relationship where they get tempted by new people. Instead the plot explored deep personal issues of Rowen and Jesse that weren't really seen much in Lost and Found. I liked seeing Rowen's artistic side and how hard she was prepared to work. I wanted to know more about Jesse's past and I really enjoyed seeing his point of view. It's hard to explain what I loved about the plot without spoiling it but I liked seeing a different side of Jesse and Rowen's relationship.
Garth Black- I liked Garth in Lost and Found but I loved him in Near and Far! I think Jesse's point of view gave more of an insight into his character. Garth also seemed to be a slightly better person in Near and Far, he was definitely a much better friend to both Jesse and Rowen! I have a feeling his book will involve him and Josie and their shared history/future.
Side Cast- I loved the side cast in Lost and Found! Near and Far added a few more characters and explored old ones further. I loved that Josie and Rowen had remained best friends and Josie was just a fun as always. I loved Alex, she seemed like an insanely fun compulsive person, I think she brought out a more relaxed side to Rowen. I loved her interactions with Jesse, poor guy didn't know how to handle some of the things she threw at him! I liked her relationship with Sid, it was random, serious and light-hearted at the same time, I wouldn't mind a novella on them...... :P Two side characters I loved to dislike were Jolene and Jax. Jolene I disliked because not only was she single-mindedly pursuing a taken guy but she was also heavily flirting with two boys who had 'dated' her best friend/cousin which is just rude! Jax was just completely arrogant and inappropriate . I did however like the roles these two characters played in Jesse and Rowen's love story!

What I didn't love as much:
Willow Farm- Despite getting Jesse's viewpoint much of his time at home was spent out working meaning there was much less of the Walker family and Josie! I wanted to see more of his sisters especially Lily so I was slightly disappointed!

I loved the side cast, the dual viewpoints and Jesse and Rowen's very realistic relationship.
Are you a Nicole Williams fan?
Much Love!
Lettie
Xxxx