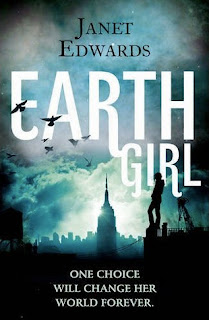 I know what you call us. Throwbacks. Neanderthals. Apes.
In the far future, the universe is divided into two different groups Norms, who can portal between planets, and people like Jarra, the one in a thousand born with an immune system that doesn't allow them to survive anywhere but Earth.

But I have a plan.
Norms come back to Earth for one reason: to study human history- like the ruins of what was once New York City. But only if they don't have to interact with any Apes alone the way. 18-year-old Jarra has a plan to change that.

This one Earth girl who won't give in.
Why?
I loved the sound of Earth Girl and Earth Star so I was thrilled when Harper Fiction sent me the two books!

World Building- I liked the futuristic sci-fi feel to the book! I really loved how the universe had been spilt into different sectors named after the Greek alphabet. I'm looking forward to seeing more of the different cultures on Beta and Gamma as they seem the most diverse! The role the military played in the exploration and settling of new sectors made them seem much more like explorers than fighters!
I enjoyed the 'concept' of ape people, it was a different concept I enjoyed how it was portrayed and all the prejudices. I especially liked the ide of pro parents who supported the ape children. The world building was amazingly complex and well written- I really felt like I understood how the world had evolved and developed!
Jarra- I felt Jarra really developed throughout the book. I loved her passion and thirst for knowledge and how she had fully immersed herself in her passion for History so she was clearly ahead of her class. The way she wanted to confront 'exos' was understandable but I liked how she grew to realise she was actually judging them more than they were judging her and realised they weren't that different. I really loved seeing how the class changed and challenged Jarra as a character!
Side Characters- Issette was my favourite side character. Issette really complemented Jarra with her positivity and optimism towards life and her acceptance of her life. I missed her during Jarra's breakdown! Krath intrigued me, I hope we read more of him soon! The Pre history class was full of such interesting different characters! Lolita and Lolmack represented the very different Beta sector and definitely added a dimension to the class. I loved their hidden secret motivations! Dalmora was such a genuinely sweet and caring person despite the fact Jarra assumed she would be snobby as she was from Alpha! Krath was obviously the loose cannon member of the class, brainwashed by a fanatic father. I admired Episilon girl determination to go to University and become a teacher to help her planet despite the fact all of her friends were getting married and starting families. Fian was my favourite Norm character. Again I felt he really complemented Jarra well with his patience and stubbornness. I also admired his passion and attention to detail, he always worked hard to make sure he was as good as possible. Playdon made a very good teaching character as he was willing to put aside prejudices in the face of clear ability and allowed his students to work to their own level
What I didn't love as much:
Breakdown- I don't want to spoil the book but Jarra's breakdown while realistic did seem to drag on a bit!