Callum and Harper by Fisher Amelie. 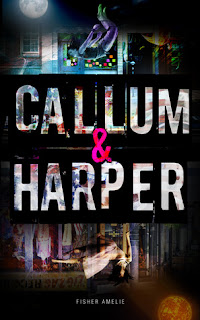 Life sucks for orphans Callum Tate and Harper Bailey.
Kicked out of their foster homes because they suffer the 'eighteen disease' with nothing but a hundred dollar check from the government and a pat on the back, they're forced to rely on a system that failed them miserably.
So they sit. They sit inside Social Services, waiting for their social workers to call their names and offer them the miracle they know will never come but they sit anyway because they have nowhere else to go, no other options on their very literal and figurative empty plates.
But as they sit, they notice the other. Although captivated, they each come to the conclusion that life is complicated enough without throwing in a boiling tension that can't ever be acted upon because they're both too busy thinking about where their next meal will come from but when their names are called and both are placed on a year long waiting list for permanent housing, suddenly relying on each other seems like a very viable plan B.
And, oh, how lovely Plan B's can be.
Well, except for the psycho from Harper's past that haunts her and, oh, yeah, there's the little issue that neither of them knows they're in love with the other.
Needless to say, Callum & Harper's life just got a bit more complicated.
“One day, you and I are gonna’ wake up and be alright. Maybe not today, maybe not tomorrow but one day. One day. I promise you.” - Callum Tate
Why?
I have been meaning to read Callum and Harper since I loved Thomas and January last year!

Five Things about Callum and Harper!
Coincidences- Callum and Harper is a sweet story of coincidences! I loved that they were both unlucky enough to need emergency Foster care that that coincidental meeting led down such a complex path!
Callum - Callum is a sweet and clever guy who had an unlucky start in life. I loved how he took Harper under his wing and really looked out for her!
Harper- Harper was sweet and naïve especially for a foster child. I liked how much
Side Cast- Great side cast! I knew I'd love Cherry, she was just as bubbly and welcoming as she was Thomas and January. Charlie was a great guy, I would love to read more on him and Cherry! It was great to read Tom before Thomas and January, I could really see the change in his personality. All of the side cast were warm and welcoming people, I loved how they just accepted Harper into their group and made her feel accepted especially how they helped her out with so many different aspects of her life.
Miscommunication- Callum and Harper were so awful at communicating with each other! It started to annoy me towards the end because they knew each toerh so well but just never discussed important things!

I really liked learning all the backstory and Callum and Harper had such a sweet story!