The Year We Fell Down by Sarina Bowen. 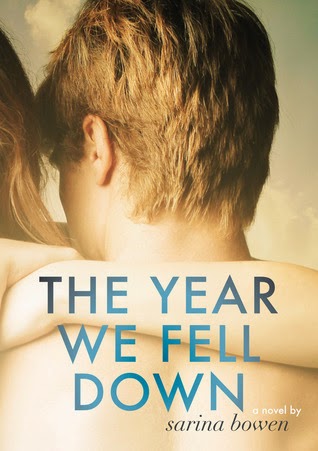 The sport she loves is out of reach. The boy she loves has someone else.What now?
She expected to start Harkness College as a varsity ice hockey player. But a serious accident means that Corey Callahan will start school in a wheelchair instead.
Across the hall, in the other handicapped-accessible dorm room, lives the too-delicious-to-be real Adam Hartley, another would-be hockey star with his leg broken in two places. He’s way out of Corey’s league.
Also, he’s taken.
Nevertheless, an unlikely alliance blooms between Corey and Hartley in the “gimp ghetto” of McHerrin Hall. Over tequila, perilously balanced dining hall trays, and video games, the two cope with disappointments that nobody else understands.
They’re just friends, of course, until one night when things fall apart. Or fall together. All Corey knows is that she’s falling. Hard.
But will Hartley set aside his trophy girl to love someone as broken as Corey? If he won’t, she will need to find the courage to make a life for herself at Harkness — one which does not revolve around the sport she can no longer play, or the brown-eyed boy who’s afraid to love her back.


Thoughts
It's taken me awhile to get my thoughts together on The Year We Fell Down so this will be a short and sweet review!

I absolutely loved the take on the usual cliché especially the approach to disability.
Corey was a seemingly well-adjusted girl who just needed to work on her emotional side! I admired her determination to live out the life she had planned as closely as possible, it made it impossible to view her as a one dimensional extension of her wheelchair. Her self-decrepitating humour added to this although at times it was a bit much.
Hartley had broken his leg leaving him out of sport and in crutches which allowed for an interesting bond to form between Corey and him as she got to play an 'expert role'. Hartley was such a charming character, I loved how well he listened to Corey and read her hidden meanings- there was very little miscommunication! His secret background really added dimension to his character as it made him vulnerable.

Side casts are my favourite and The Year We Fell Down did not disappoint.
Dana was a fun and social housemate to Coery who didn't even bat an eyelid at sharing with a disabled person in a different setup then everyone. I loved reading her interactions with Daniel and look forward to reading more of that.
Corey's family were all still adjusting to her new life. Her father in particularly seemed riddled with guilt which lead to overprotectiveness. Her brother was a typical big brother as well as a good friend.
Bridger was a great best friend to Hartley and very welcoming to Corey. He initially seemed a typical jock but he had a few issue under the surface. I found him intriguing and looked forward to reading his book!
Hartley's Mum was brilliant. I loved how welcoming and selfless she was to Corey and Bridger. I admired her more as Hartley's background was explored.

Corey’s disability although prominently portrayed throughout the book, was not a central part of the plot. It added to Corey by creating an unfulfilled athletic dream and created a bond between Hartley and Corey but it was never made to be a big issue. I also loved how in Corey 's case the wheelchair was a very fluid conception, sometimes she used crutches or scooted around etc.
Rating!

This is the first in a fabulous college companion series which gets better and better!
The fifth book releases tomorrow!