Finding It by Cora Carmack. 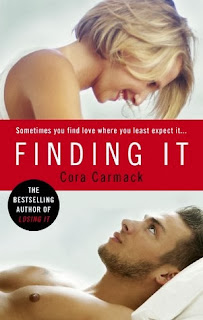 Kelsey Summers is looking for love in all the wrong places.
Spending a few months travelling around Europe - with no parents, no responsibilities and a no limit credit card - Kelsey's having the time of her life.
But when she completely embarrasses herself in front of the hottest guy she's ever seen, she soon realises there's more to life than the next party.
What she doesn't realise is that although she's on a journey to find herself, she will end up finding The One...

Thoughts
I knew I'd enjoy Kelsey's story throughout the series she has been the 'wild' one out of group so I was a expecting an exciting book! I was worried to begin with because sometimes European settings fall flat or overtake the story but I really loved the setting in Finding It.
The journeying aspect was very realistic and fed into the plot perfectly. I loved the Budapest night of Baths, I have to experience that for myself! The romantic portrayal of Italy was brilliant and again went with the plot. I actually found that the destinations and journeys complimented the plot at all the right times.
I enjoyed Kelsey, she was bold and brassy. She had a surprisingly deep and complex background which was slowly revealed and explained so much about her character. I loved how she grew into herself and as a person. I really respected how she travelled solo although at times she was completely reckless and needed to keep in contact better.
I found Jackson such a mysterious character. The way he kept poping up wherever Kelsey was initially seem quite odd but he was so enigmatic and charming that it wasn't as weird as it could of been! I loved how he slowly warmed up to Kelsey and saw through her brassy exterior, especially his reactions to how bold she could be. I did find his secretive behaviour annoying at times though!
The ending for me was the best part as Kelsey had really grew as a person and become responsible and independent. She was no longer needlessly reckless and had started working on her familial relationships. The only bad part of this book was the lack of Cade! I was expecting an update at least!