Cover Comparisions! Under The Never Sky

Post which will feature book/reading related things I love!
This post is on Cover Comparisons!
Everyone judges covers! I thought I'd do a comparison on how international covers would have affected my judgement of certain books as covers differ so vastly between countries!
This post's book is Under The Never Sky by Veronica Rossi! 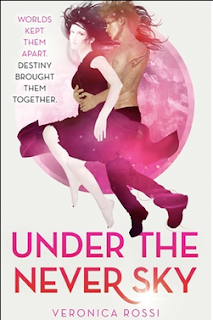 ﻿Judgement- Not as eye catching!I would have assumed it was more dystopia and a lot less sci-fi. I would have thought it was more Hunger Games violence and solidarity whereas Aria and Perry are equal main characters!

﻿Judgement- I like this cover but looks a lot more like a sci-fi space story with a female lead! I would have thought Star Trek/Glow style setting and plot.

﻿Judgement- Beautiful cover! It looks like a more nature based fantasy than a dystopia though!
Netherlands!
﻿

﻿Judgement-   The girl is kind of creepy and again I'm thinking Sci-Fi fantasy!

﻿Judgement- Love this cover! It actually features Aria and Perry who are equally the lead characters, however it does look very wintry!

Final Judgement
I initially preferred the USA one but I slowly converted to the UK one as it was eye catching!
However then I saw the new UK one...

All it needs is both Aria and Perry on the front and it would be perfect!