Over It by Sarah Billington: Blog Tour! 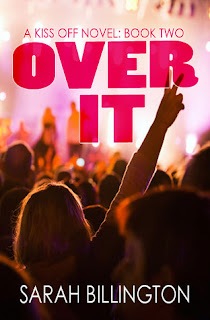 Teen Youtube song writing sensation Poppy Douglas's lead singer boyfriend Ty's been criss-crossing the country and living it up on tour for months while Poppy has been stuck in the boring suburbs, finishing out the school year.
But it's Summer now, and the best thing just happened: Poppy's royalties for writing the hit song The Kiss Off just came in. She's minted, and she knows just what she's going to blow it on.
Ty's band Academy of Lies are headlining a summer music festival, and Poppy is taking her girlfriends along for the best weekend of their lives. It's all organized: the weekend is going to be full of camping under the stars, backstage passes, VIP rooms and partying like rock stars, not to mention some long awaited one-on-one time with America's favourite front man.
Except, when someone drops out of the trip and Poppy takes the opportunity to mend a broken friendship, it doesn't quite go according to plan. And when she meets her boyfriend's BFF from another band, the paparazzi form their own totally wrong conclusions. There's also the matter of Ty's 'super fan' stalker, but the less said about her the better.
The biggest test of all comes in the form of an opportunity too good to pass up. But will insecurities and jealousy stand in Poppy's way? Can Poppy and Ty's relationship even survive it?
Life is about to get much more complicated for Poppy Douglas, but what can you expect when your boyfriend is a rock star?
I loved The Kiss Off so I jumped at the chance to join this tour! Unfortunately I didn't finish Over It in time to review it so enjoy this extract!
Extract


About Sarah Billington
Sarah Billington is an Australian writer and editor who likes to write stories with love,laughs, suspense and zombies. Sometimes all in the same story. Her favouritest thing to write about are those horrendously awkward moments that come with being a teenager. Or a human being. Sarah was extremely accident-prone and klutzy as a kid and teen, so her cup runneth over with experiences of horrendously awkward moments to draw from in her writing. Thankfully, she has grown out of her klutziness. Mostly. She is, however, still an embarrassment.
She loves a variety of random things, which include Swing Dancing, Ice Hockey, Roller Derby and is a bit obsessive about paranormal investigation shows and channel E!.

I love Ty and I can't wait to finish Over It!
Let me know if you're a fan too!
Much Love!
Lettie
Xxxx