If I Stay and Where She Went by Gayle Forman! 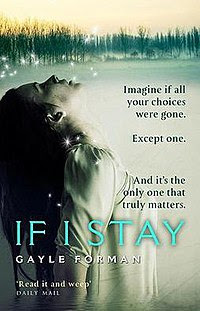 The last thing Mia remembers is the music.
After the accident, she can still hear it. And she can see her damaged body being taken from the wreck of her parents' car - even though she can't feel a thing.
All she can do is watch as doctors rush to save her life, as her friends and relatives gather outside her room, as the boy she loves struggles to be near her.
As the next twenty-four hours unfold, Mia must come to terms with what came before the crash - and what could come after. And she knows she must make the most difficult choice of all.


All the hype surrounding this book is so well deserved! It was so heart breakingly perfect! This review was hard to write as I loved so much of it but I couldn't quite put it into words!
What I loved:
What I didn't love as much:

It's been three years since Mia walked out of Adam's life.
And three years he's spent wondering why.
When their paths cross again in New York City, Adam and Mia are brought back together for one life-changing night.
Adam finally has the opportunity to ask Mia the questions that have been haunting him. But will a few hours in this magical city be enough to lay their past to rest, for good - or can you really have a second chance at first love?

Where She Went was so similar yet so different from If I Stay. Adam narrated this one from his point of view and it had less of an obvious direction. In If I Stay it was all building to Mia's decision and she had to decide one way or another but in Where She Went there wasn't the same promise of resolution. I don't know who I love more Mia or Adam but I felt this book showed more of Adam's raw emotions whereas If I Stay had less in depth individual emotional exploration.

What I Loved:
What I Didn't Love:

x2!
Loved these books so much- I know they will be staying with me for awhile!
Let me know if you have any recommendations of similar books just slightly out of my happy ever after zone :)