Top Ten Tuesday is hosted by: The Broke and the Bookish.
This week's topic is Top Ten Books For People Who Like X Author.

I'm picking Lindsey Kelk- Author of the I Heart series and The Single Girl's To-Do List!
Lindsey's books are witty and funny with clever quirky heroines and realistic hot men!
I am attempting not spoil any of the books (apart from I Heart New York- if you haven't picked it up by now....) so I'm referring to the guy Rachel ends up with in The Single Girl's To Do List as love interest!

If you love Lindsey's books you will like these: 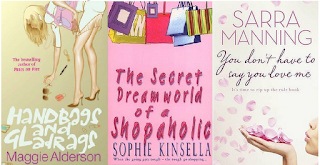 Handbags and Gladrags by Maggie Alderson. Emily kind of reminds me of Angela. Emily is how I imagine Angela was prior to fleeing to New York- oblivious to the state of her relationship and a little bit helpless! Handbags and Gladrags is a lovely read- Emily is quite a tragic heroine, her life seems so perfect but it quickly falls apart. Of course, she gets very nice Australian to help her put it back together!

You Don't Have to Say You Love Me by Sarra Manning. The male leads in SGTDL and this one are really similar. Both perceived to be playboys. Both seem to be the wrong guy or Mr Right Now. Both end up perfectly balancing out Neve and Rachel. :) I love You Don’t Have to Say You Love Me so much- the characters are well crafted and realistic especially Neve who is still a girl who feels fat inside despite her weight loss and Max is typically flawed yet good.

The Secret Dreamworld of a Shopaholic by Sophie Kinsella. Becky and Luke remind me of Angela and Alex despite their obvious differences’ I love how Alex and Luke seem to be amused and tolerant of Angela and Becky's slight insane moments! Becky's over the topness and Angela's tendency for getting in to messes. The Shopaholic and I Heart series both follow the adventures of English girls with a penchant for making messes who travel across the pond and find love! 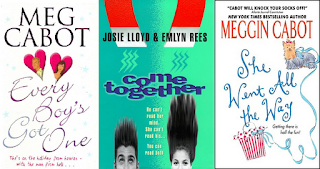 Come together by Josie Lloyd and Emlyn Rees. I think what is similar about the relationships in this book and Lindsey Kelk's is how realistic they are! Jack and Amy have a normal twenty something relationship as do Alex and Angela, confused about whether it's a relationship, meddling friends and lots of passion. Come Together is, in my opinion an underrated book which gives both the male and the female side to a contemporary love story.

Every Boy's Got One by Meg Cabot. Cal reminds me of the SGTDL love interest in ways and Jane and Holly sort of remind me of Angela and Louisa. I don't really know why but when I was brainstorming this Top Ten this books popped up! Every Boy's Got One is a brilliantly funny quick read of elopement and love/hate relationships which despite being part of a series can be read independently.

Can you keep a Secret by Sophie Kinsella. Love this! Emma spills all of her secrets to a random stranger on a plane while caught in turbulence however the 'stranger' turns out to be the founder of the company she works for- how awkward! I can imagine Angela doing this and it reminds me of Rachel's not so private lists! Can You Keep a Secret was like SGTDL the author's very first stand alone novel which was every bit as good as her already popular series. I hope, like Sophie Kinsella, Lindsey releases lots of really good stand alones as well as the I Heart series.

Johnny Be Good by Paige Toon. My favourite Paige Toon book of all time. Meg is, like Lindsey's leads, down to earth and a realistic character, Johnny on the other hand is a fully fledged rock star with all the matching issues! The book is such a mixture of funny, witty, twists and romance that it sucks you in until you've finished!

Chasing Daisy by Paige Toon. Like Angela, after being dumped Daisy decides to jet off rather than stay put and wallow! Daisy travels the world with the Formula One team and like Angela meets two different but equally attractive men albeit in different circumstances.

Cents and Sensibility by Maggie Alderson. This is another one that just demanded to be on the list! I think prior to SGTDL this was in my Top Five Chick Lit reads- the romance is intense and marred by personal life clashes. The secondary characters are absolutely brilliant! I did think of one slight comparison both Stella and Rachel revisit old crushes and come to the same conclusion.

Ignore the numbers- me and Blogger aren't friends at the moment it won't spell check either! Any one else having problems?
So if you love Lindsey Kelk's fabulous books as much as I do aka a lot then I know you will like these books too!
Let me know if you'd recommend any others!