The Kiss Off Blog Tour! 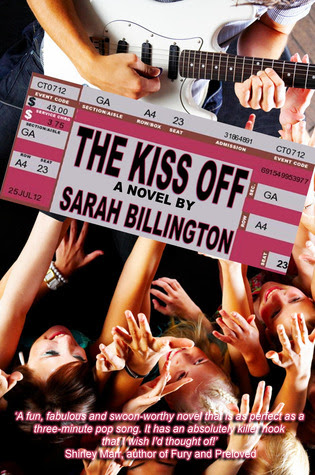 When sixteen year old Poppy Douglas writes a song about her ex-boyfriend Cam and ex-friend Nikki, she has no idea that her heartbreak is about to go global.

A local band picks up her song from Youtube and soon she’s along for the ride with her own fanbase as they blow up on the local club scene and hit the international charts. Though it turns out leaving Cam behind isn’t as easy as she had hoped.
Tangled in a web of unfinished homework, ill-considered sexting and a new lead-singer boyfriend, Poppy has a choice to make between the ex that inspired it all and the rock God whose poster lines the inside of half the lockers at school. But as she struggles to keep her emotional dirty laundry private, she learns that the truth can be hard to find when your life is in the headlines!

Welcome to the Kiss Off Blog Tour! This is the first of two posts! *due to a scheduling error it's actually the second!*
I loved the sound of Kiss Off so I was thrilled to get a chance to read it!

I really enjoyed the central, plot, the reality of the characters and the inclusion of Youtube!

I'm so excited for the sequel- I posted a sneak peek!
Much Love!
Lettie
Xxxx
Posted by Lettie at 9:00 am