*This is a new feature so the format isn't fully tested! I think I will post the cover, blurb, one thing I loved and one thing I didn't and a rating!* 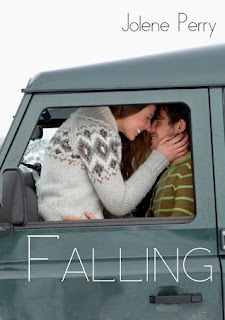 Dana is definitely not the kind of girl to be living in the dump of a wilderness lodge she finds herself waitressing in. But when Craig, the sexy cop who’s handling the murder case where she’s a witness, suggests it—it seems like a good idea. Now she’s got no BMW, no shopping and an assortment of hairy Alaskan men who definitely belong in a run-down old lodge. Her exciting visits from Craig are getting less exciting, and the lodge owner, Jason, is quickly moving from grouchy and judgmental, to funny, smart and unexpectedly complex.
Jason knows exactly the type of girl Dana is—beautiful, spoiled, and high maintenance. She’s everything that hurt him in the past, and why he now lives as far away from city life as he can manage. If he wasn’t so hard-up for help, he would have never said yes to his friend, Craig. Despite his reservations, Dana becomes the perfect antidote to everything in his life—both his disaster of a divorce and precocious little sister who shows up on his doorstep. Jason realizes he’s falling for Dana too late to stop it, or even slow it down.
As the trial approaches, Dana knows it’s time to move on with her life—but is her life back in the city she left or with a guy she never meant to fall for?

This was my drunk eBook buy! I'm so glad I managed to snap it up for 77p!
What I Loved:
Setting- I posted in my Top Ten Settings that I wanted to read an Alaskan setting! I was so pleased to find this one- I loved the snow and the snow mobiles. The wilderness aspect added an unique layer to the story as well!
Dana- She definitely grew on me! I didn't like her to begin with she seemed a bit prissy and stuck up. But as she grew as a character I began to warm to her and see all the different shades of her personality. Dana actually made for a vulnerable easily to relate character in the end!
Jason- I was initially confused as to whether or not he was the love interest or he was Craig. I liked him from the start though, he was intriguing with his past divorce and writing! I loved how he warmed up to Dana and how their relationship developed. He did however need to get a backbone when dealing with Craig. I definitely wanted to know more about him though, about his writing and his family.

What I Didn't Love as Much:
Craig- What a disgusting cop! I couldn't believe he hit on a witness as she lay in a hospital bed! I also could not believe he had the nerve to shack up his mistress in his wife's family's cabin. I did feel sorry for his wife until it became apparent she was enabling his cheating!.

I loved the setting and it was so easy to read!
Dizzy 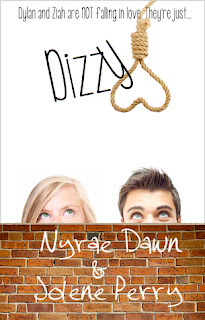 Dylan doesn’t do relationships. He and his older brother watched their dad go through hell and back, so they made a pact years ago—no girl would come between the Gibson boys. But his brother sells out. He's getting married anyway. To the sister of a chick Dylan met at a party, who's probably the angriest girl he's ever met. Unfortunately, she happens to be hot, too.
Ziah’s life is upside down—her safe boyfriend turns out to be not-so-safe, and now her sister is getting married before college is over to the older brother of a spoiled, party boy who drives her crazy. And also makes her heart beat too fast.
There’s no denying the attraction, but there's also no denying how much they irritate each other. When they’re thrown together as forced wedding planners, they find an ally in each other--neither wants this wedding to happen.
But instead of putting a stop to the crazy nuptials they find themselves at fittings and cake testing. And maybe even…a few dates?

This was one of my automatic buys!
What I Loved:
Chemistry-  The chemistry between Ziah and Dylan was very real and tilted perfectly between sweet and intense. It was beautifully written.
Paul- I loved Paul and Dylan's bromance! Paul was genuinely a part of Dylan's family, teasing everyone! He also knew all about the family issues but let Dylan believe what made him happy- such a good friend! I loved when he was flirting with Ziah just to wind up Dylan!
Side Cast- I loved how different the families were! Dylan's family was very relaxed and male orientated obviously! Whereas Ziah's family seemed very organised and structured. I loved how the parents embraced the marriage idea whereas the siblings hated it!

What I Didn't Love as Much:
Slow burner- This book didn't grab me straight away, I read a decent part of the book before it really sucked me in.
Confusion- I found it a bit confusing in places! Was Dylan in High School or College? Was Ziah?

I did love the characters and the chemistry but it was slow to get in to! 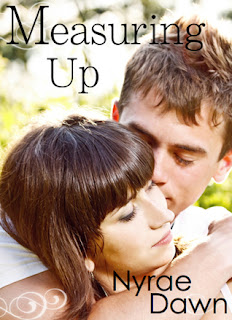 Seventeen-year-old Annabel Conway is tired of the Hillcrest High School elite making her life miserable because she’s not a size two. This summer, she's hiring a personal trainer to help her lose weight.
Annabel doesn’t expect her trainer to be a gorgeous guy around her age. Boys like Tegan are jerks. They pretend to like girls like her so they can make an idiot out of them. Been there, done that. Totally not going there again. She kind of hates him on principal. Blond. Muscular. Funny. It doesn’t help that he knows her measurements!
Soon, Tegan's so much more than that. He’s the boy who teaches her to box when she has a bad day. Who jogs with her and lets her set the pace. Who kisses her until she melts. He makes her feel beautiful regardless of what the scale says. Unlike her mom, he doesn’t expect perfection, and he doesn't try to shield her from the world like her dad and best friend. Tegan likes her the way she is.
But what happens when he’s not there? He can’t always be there…
Will Annabel be able to stand on her own and learn that she already measures up? That her worth doesn’t lie in what the world thinks, the scale says, or even what Tegan tells her—but in herself?

I kept missing the offers on this one and then when I did snap it up I kept putting off reading it! I had to look up American sizes as a 14 isn't fat at all in UK so I was really confused!

What I Loved:
Annabel- I loved how spunky she was and deep down she was confident and tough she just needed to believe it. I liked that she was losing weight for her. I loved how genuinely nice she was.
Side Cast-Dana and Tim were supportive and welcoming towards Annabel from the start. I loved Tim's whole outlook on life and how funny he was!I loved Em's devotion and auto defence of Annabel- I wanted to see more of her. I loved how protective Annabel's dad was, constantly trying to enforce that she was fine as she was and all his nicknames were so cute. I even liked Annabel's mum a little despite her awful qualities obviously loved Annabel and just failed to show it properly.
What I Didn't Love as Much:
Billy- Such a typical horrible high school guy. The things he did to Annabel were awful and mean, the way he fought with Tegan was downright cowardly especially when he clearly cried to his mum. I could not believe it when he then made a play for Annabel!