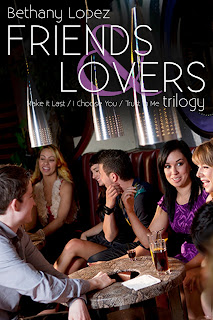 Make it Last:
In a small town, it's hard to recover from being dumped by your high school sweetheart. That's just what Briana has to do after Colin leaves her to follow his dreams. She focuses her energy into her friendships and the pursuit of her own goal of becoming a chef. Just when she finally feels like she's on the right path, he comes back to town.
Colin knew breaking up with Briana before leaving for college was the right thing to do. He was determined to leave small-town life behind forever, and that included his high school girlfriend. But when a sports injury puts him on the side-lines, he's forced to return home. Seeing Briana again brings back a lot of memories, and Colin wonders if he made the right decision. It doesn't take long for him to realize he wants her back, and this time, he wants to make it last.
I Choose You:
Up until now, Nicole's life has been mapped out for her. She'd go to college, marry Jake and become the upstanding minister's wife. When she leaves that life to begin again in a small town in Texas, she finally has the freedom to live as she chooses. There, she meets Kent, a guy whose charm and passion make it hard to stick to her morals.
Dodging his father’s fists and protecting his twin sister made Kent into the man he is today. He learned by watching his mother stay by his father’s side that it’s better to keep relationships simple. Then he meets Nicole. Her sweet smile and genuine response to him land like punches to his resolve. After a lifetime of learning to protect his heart, can he finally let down his guard?
Trust in Me:
Roni’s dreams of becoming a contemporary dancer were smashed under the brutal rage of her ex-husband's fists. Getting divorced and starting over at the age of twenty-two was never her plan, but maybe in Texas, she'll find her path. When the town's local player, Rich, opens a Rec Centre, she sees a way to rekindle her dancing dreams...and maybe have a little fun with her sexy new boss.
Rich never expected to fulfil his dreams in the town he planned to leave behind, but that's just what he's doing. His reputation as a noncommittal ladies' man might make it challenging to earn respect in the business world, but he's willing to prove that he's serious. In fact, when it comes to pursuing Roni, he's more than willing. But she's taking a page out of his book, not wanting to risk another relationship. Can he convince her that his playboy days are over and that she can trust him with her heart?
﻿
I love Bethany's Friends and Lovers series! I've already reviewed Make It Last and I Choose You which I enjoyed but Trust in Me was my favourite!
Why?
Rich! I think Rich was the main reason I loved Trust in Me so much! I loved Rich in Make it Last so I couldn't wait for him to take a more main role! His recreation centre was such a clever and giving idea- I loved how devoted he was to the idea and how seriously he took all aspects of setting it up. The way he was with Roni was so sweet despite his so called reputation.
I also liked the deeper plot line regarding Roni's past. After I Choose You I knew there was more to Kent and Roni's background so I was both intrigued and disgusted to read the full extent of their awful parents and Roni's ex husband. I loved how connected Kent and Roni were and how Nicole fit in with their little family.
I loved Alex and Jason- I was hoping they would get their own story! There was definitely more than met the eye with them!
The only negative, as usual, was I wanted more closure on Roni and Rich!
Epilogues!
I mentioned in all of my Friends and Lovers' reviews that I felt they were too short so I was so glad all the books got bonus endings!
Make It Last:
I loved that Brianna and Colin are really growing in to their new lives together although I was a little disappointed that their extra scenes weren't in their new home!
I Choose You:
Kent and Nicole were definitely the sweetest couple of the three and their extra scenes were exactly what I expected. I loved that it tied up some important threads from their book and paved the way forward for them as a couple.
Trust in Me:
Rich and Roni's story had a more muted ending so I was eager to see how they were progressing. I liked how their scenes included flashbacks to important moments that happened after the end of the book. I loved that their scenes really gave them hope and a definite future together!
I'm sad that Friends and Lovers is over but I'm looking forward to more from Bethany Lopez!
Which couple is your favourite?
Much Love!
Lettie
Xxx
Posted by Lettie at 7:00 am