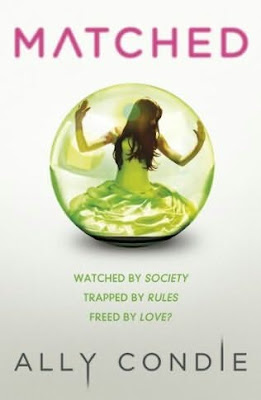 Cassia has always trusted the Society to make the right choices for her: what to read, what to watch, what to believe. So when Xander's face appears on-screen at her Matching ceremony, Cassia knows with complete certainty that he is her ideal mate... until she sees Ky Markham's face flash for an instant before the screen fades to black.


The Society tells her it's a glitch, a rare malfunction, and that she should focus on the happy life she's destined to lead with Xander. But Cassia can't stop thinking about Ky, and as they slowly fall in love, Cassia begins to doubt the Society's infallibility and is faced with an impossible choice: between Xander and Ky, between the only life she's known and a path that no one else has dared to follow.

I picked up this book over a year ago- didn't click with me and my workload at the time!
A year later I loved it! Took me awhile to get this review up!
What I loved:
What I didn't love as much:

I loved the society but I didn't really connect with the passion- still a good read!
Crossed and Reached are on my Autumn TBR- I decided to read them together as I hear Crossed ends with a cliff hanger!
Did you enjoy Matched? Have you read Crossed?

Much Love!
Lettie
xxxx
Posted by Lettie at 9:00 am