My Life Next Door by Huntley Fitzpatrick. 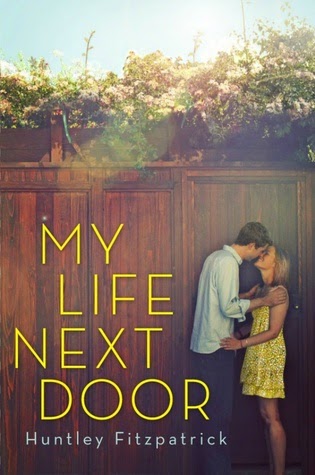 "One thing my mother never knew, and would disapprove of most of all, was that I watched the Garretts. All the time."The Garretts are everything the Reeds are not. Loud, messy, affectionate. And every day from her rooftop perch, Samantha Reed wishes she was one of them . . . until one summer evening, Jase Garrett climbs up next to her and changes everything.
As the two fall fiercely for each other, stumbling through the awkwardness and awesomeness of first love, Jase's family embraces Samantha - even as she keeps him a secret from her own. Then something unthinkable happens, and the bottom drops out of Samantha's world. She's suddenly faced with an impossible decision. Which perfect family will save her? Or is it time she saved herself?
A transporting debut about family, friendship, first romance, and how to be true to one person you love without betraying another.


Thoughts!
Why didn't I read this earlier?? It's been on my tbr since it released in 2012- it was so worth the wait!
My Life Next Door is a layered traditional contemporary summer book with twists and well written characters. It wasn't cliché as I'd anticipated.
Samantha Reid was a great lead. I found her sweet and hard working if a little naïve. I love how she slotted into her life next door as she seemed to be a bit neglected at home especially with her sister gone and her Mum otherwise occupied. Jase was such a welcoming and generous male lead. He wasn't a cliché good or bad guy he was simply a well rounded mature teenager. I loved how he took on responsibilities for his family but would occasionally complain. I liked how he treated Samantha and how easy going he was.
My Life Next Door has a well written individual side cast with all their own issues and personalities. The Garretts were such a vibrant family with so many different personalities. It was easy to see how and why Samantha was attracted and intrigued by them as they were so different to her family. I loved how all of them had positive attitudes and were well adjusted enough to rise above other's prejudices. I could probably write a detailed profile of each of them so I'll curtail my love of the siblings. Dad was a steady and pragmatic man with his approach to providing for his family, I loved how he was honest with Tim but still trusted him as an employee.
Which brings me to Nan and Tim. Nan was a more complex character than she seemed. Initially I took her for a good friend if a little snobby but as the book progressed it became clear that she was exceedingly rude, cruel and entitled. Her apparent concern for Tim masked a deep jealously and I defiantly think she's heading for a breakdown. Tim was my breakout character, I loved him. Tim really developed and grew over the course of the book. I liked how he flourished under the positive encourage of the Garretts and Sam. Sam and Tim's friendship was resurrected and it was clear to see how they had grown apart and refreshing to see a platonic strong friendship which developed. I also loved his interactions with the Garretts, how he stepped up when needed and his banter with Alice.
Samantha's Mum was another surprisingly complex character. She projected the image of career driven and confident involved Mum but it became clear that she wasn't as confident in herself as she seemed. I couldn't believe how her plot twisted and turned especially her sudden disregard for Samantha despite her initial concerns over how and where she spent her summer.
My Life Next Door was primarily character driven, the plot itself was a clever manipulation of prominent clichés such as boy next door, rich/poor divide.
I loved the summery setting the town was big enough for the whole story to largely stay in one place. I loved the positioning of the summer jobs, the country club etc. It was like a storybook American summer town which was the perfect setting for My Life Next Door.