EMBRACE…endless possibilities.  A new adult imprint from Entangled, launching November 11th!  It is launching with four exciting titles—Ruined, Hushed, Trouble Comes Knocking, and Definitely, Maybe In Love.You can follow them and get more information about future titles @EPEmbrace or their facebook: https://www.facebook.com/EmbraceImprint

Today I have Jus Accardio explaining what she finds to be the hardest part of writing Paranormal books!


It's no secret that I love paranormal books. Love reading them, love writing them. Hell, I kind of wanna live in one (preferably one with a hottie like Jax to keep me warm ;) ). But sometimes it's a little frustrating.
We've heard the saying. It's all been done before. (Bah. And now I have that song stuck on my head…) If I had to pick a hardest part of writing paranormal—of writing anything, really—it would be making each story different enough to stand out. Putting a unique spin on an old idea so that it's not stale and overdone. Look at it this way. Mashed potatoes are awesome, but you wouldn't want them every night of the week for a year, right?
So the old ideas need to be switched up. Tweaked and twisted so that they're new again. It could be as simple as giving your main character, for argument's sake we'll say a vampire detective, an odd quirk. Maybe he can't stand the sight of blood. That's certainly going to put a wrench in things since, yanno, he's a vampire. Or maybe your main character, a ghost, is afraid of the dark. Regardless of the tropes your story might have, there's always a way to change it up.

Each character has their own identity, therefore, provides endless ways to change the story. With their own set of quirks, the possibilities for creating something different are infinite. You're limited by only your own imagination. While the basic idea behind most books might not be new, there is always a way to make it fresh. What's the most unique spin you've seen put on an old idea?

About Jus
JUS ACCARDO spent her childhood reading and learning to cook. Determined to follow in her grandfather’s footsteps as a chef, she applied and was accepted to the Culinary Institute of America. At the last minute, she realized her path lay with fiction, not food, and passed on the spot to pursue writing. Jus is the bestselling author the popular Denazen series from Entangled publishing and is currently working on the first book in a new adult series due out summer 2013. A native New Yorker, she lives in the middle of nowhere with her husband, three dogs, and sometimes guard bear, Oswald.
About Ruined 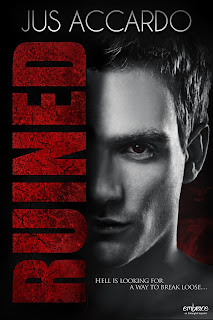 Hell is looking for a way to break loose…
Jax lost the genetic lottery. Descended from Cain, the world's first murderer, he's plagued by a curse that demands violence in exchange for his happiness. He left everything behind, including the girl he loved, but thriving on the pain of others is lonely… And it's killing him.


After a series of heartbreaking losses, Samantha put rubber to pavement and headed for college as fast as her clunker could carry her. But she can't outrun her problems. When an attack at school drives her back home, she's thrown into the path of a past—and a guy—she's been trying to forget.


Sam strains Jax's control over his darkness, but running isn't an option this time. Someone—or, something—followed her home from school: a ruthless monster with a twisted plan centuries in the making. Forced together to survive, and fighting an attraction that could destroy them both, Jax and Sam must stop a killer bent on revenge.